The two of you sit in comfortable silence while you digest all she's told you. So...the gnomes get hats, you ask?

Oh, yes, Lokum replies. That ancient mystery has long since been unraveled, thanks to the wonders of Dwarven Science!

You see, she explains, Armok is not an unkind God. The gnomes, though one with nature and engineering alike, are frail and brittle. Even the most shoddily made pig tail fiber sock dropped from above would easily crush their egg-shell like skulls. Arkmok, in his infinite and all-encompassing wisdom, bestowed unto the gnomes the secret of conical hats to protect their feeble heads from the things that would bring about their deaths, like socks or a light rain.

Granted, this gift does not mean that GNOMES are Armoks favorite children, not at all! Quite contrary, this simply shows that Armok loved us, the Dwarves, enough to make our skulls much firmer and well-made. Our kind was made with love and diligence, whilst the gnomes and humans and others were built around us to provide a backdrop for the glory of the Dwarven race! You see?!

This is why Dwarves are the only ones who worship Armok. Humans have their own pantheon of Gods (crafted in their own image, how vain!), the Orcs have a routine of bloody Ancestors (vile and disgusting, mind you!) and the Elves believe in a nonsensical "force". That doesn't even make sense! That's not even a God!

Dwarves, though we all may worship our individual Gods, all pay homage to the All Father, the First, the God of Blood.

Of course, you must already know this, having your own deity of worship and whatnot. 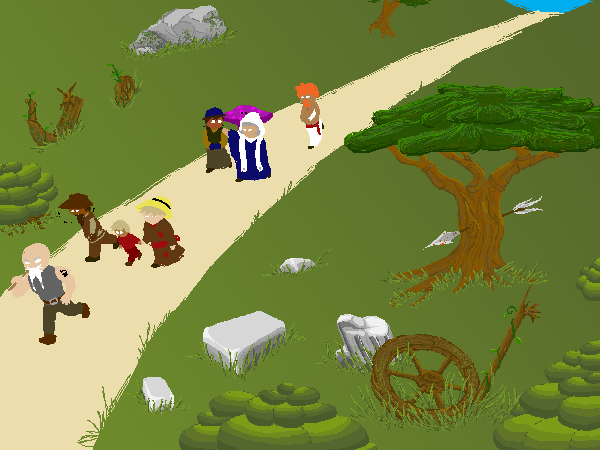 You don't have any Gods of Worship, you admit. You've never selected your patron Gods, she exclaims?! Why didn't you say so! We can fix that right now.

Wise Bookfire, the Goddess of Knowledge and Rage, who has bestowed insight and madness upon those who draw her eye or ire,
Enchanting Cakewine, the Goddess of Deception and Drink, who delights in leading wandering adventurers astray,
Stoic Sunshield, the God of Children and Protection, who blesses the children of his followers and shields those who bear his sigil,
Bloody Stonetusk, the God of Fortresses and Conquest, the bloodiest of the seven and patron of Shielddawn itself,
Glittering Golddug, the Goddess of Wealth and Gems, who guides the hand of miners in the dark tunnels and brings them to the riches below,
Inconstant Urist CCCVI, God of Suicide and Reincarnation, who takes his own life at the end of each year only to be born anew the next,
And Humble Cowsea, Goddess of Cheese and Cattle, who keeps milk from spoil and the beast of the field docile.
Most Dwarves never take more than two of the seven as their patron, lest their worship be diluted to the point of inconsequence. So tell me, young Dwarf, whose blessing do you seek?